A Fish Out of Water?

All my storytelling venues shut their doors with the lockdown and a storyteller, with no schools, care homes, community groups or festivals to visit, is like a fish out of water.

2020 is The Year of Scottish Coasts and Waters and I was so looking forward to travelling around the coasts of Scotland sharing and finding local stories in my role as the honorary resident storyteller on RowAround Scotland. I am a keen coastal rower and have been collecting nautical stories for several years now whilst sailing on tall ships and rowing up and down the Firth of Forth. 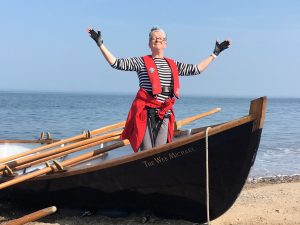 I caught Covid-19 on March 20th and during my recovery I told ‘Doorstep Mile Stories’ of tenacity and resilience, every morning, live on Facebook. I have also been recording stories of the sea for the Virtual RowAround. Former Cambridge Blue and Great Britain rower Sue Fenton has been tirelessly skippering us through pandemic waters, an email from Sue regularly pops up in my inbox asking:

“Have you got a story up your sleeve?”

One of the silver linings of the pandemic for me has been finding new stories  – well new to me – and sharing them with other SCRA rowers. I have discovered the genius of Hugh Millar the Stonemason-Poet of Cromarty. The names of the skiffs on every stage all have a story to tell so I learned about Saucy Mary – the Norwegian Princess who lured sailors on the West Coast past her Skye tower only to charge them a tax by stretching a chain across the water to Kyleakin. 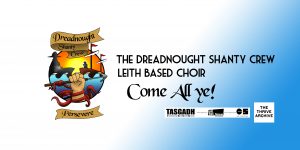 They say that a silent ship was a dangerous ship – that singing a sea shanty raises moral so The Dreadnought Shanty Crew, that I set up in my local pub in January 2020 with the help of a wee starter grant from Tasgadh and Creative Scotland, also took to the virtual waters with the Leith motto Persevere. Overnight our crew became international and brought new opportunities to sing shanties with like-minded sailors in France and The Netherlands. 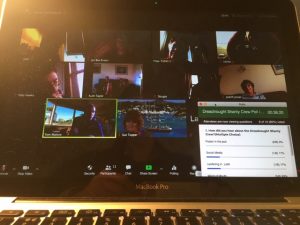 Tom Malone, the organiser of the first Oban International Shanty Festival is a regular crewmember and I was thrilled to be invited to tell a tale at the Virtual festival.

So what’s next? We are still riding the waves of the pandemic and nothing has changed for the arts. The forecast for the creative economy and for freelance storytellers is bleak but I’ll keep singing and sharing stories. Plans are afoot for the Scottish International Storytelling Festival and funding bids are being prepared…watch this space for some monstrous tales to arise from the deep… Scuttlebutt Stories – coming soon to Leith!

Below the thunders of the upper deep;

Far, far, beneath in the abysmal sea,

There hath he lain for ages and will lie

Battening upon huge sea-worms in his sleep,

Until the latter fire shall heat the deep;

Then once by man and angels seen,

In roaring, he shall rise and on the surface…