…under her black veil I realised that she was stripped down and that her bare boards were teak, so I asked around to hear her story:

“This is Mhari Bhàn, a 26 ft. sloop designed by Rouse and built between the wars in Hong Kong,”

“What is she doing here?” I asked

“She was staved when another boat fell on top of her during an East Coast storm”. 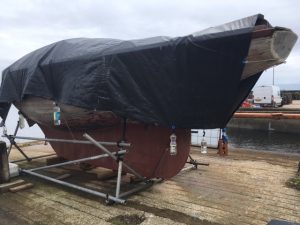 On my return home I started to research into the boat and her designer:  Mhari Bhàn was built in 1934 and Harold Stuart Rouse (cheerily known as ‘Uncle Rouse) was once commodore of the Royal Hong Kong Yacht Club. An engineer by day Rouse spent his leisure time designing and racing yachts with the help of his good friend ‘Teddy’, Edward Cock MBE, who was President of the Hong Kong and Whampoa Dock Company.

Between the wars ex-pat life in Hong Kong was good. The yachting set had a busy programme of races and the season ran from November to April starting and ending with a formal ball. A keen sailor would spend all weekend every weekend on the water, using the clubhouse as a watering hole between races and 19-year old Lieutenant Horace Wilfred ‘Bunny’ Browne was one of them. Sent to Hong Kong in 1939, Browne had ‘an adventurous trip’ from London via Calcutta during which he had lost all his possessions. On arrival, his insurance brokers Cox and Kings paid out £100 with which he re-kitted himself, bought a dinner suit and had £35 left over to buy a yacht.

Yachts were cheap to build in Hong Kong and they were designed for speed. Norwegian designer Johan Anker’s ‘A-Class’ boats, once described as ‘toothpicks turned on their side’, were the popular forerunners of the today’s elite Dragon Class.

Rouse was fortunate in timing his retirement, with his new yacht ‘Golden Dragon’ tween decks he shipped back to Blighty planning to race her at Cowes under the RHKYC pennant. His friend Teddy took over as Commodore in 1937 and oversaw the building of a beautiful new clubhouse but the good times in Hong Kong were about to change.

The Battle for Hong Kong started on December 8th 1941, the same day as Pearl Harbour. Bunny Browne was between yacht races at the clubhouse that Sunday morning when he was notified to report for duty immediately. During the 18 day battle, the Allies retreated from the mainland to Hong Kong Island and surrendered to the Japanese on Christmas Day.

Many members of the yacht club had signed up to be reservists in the Wavy Navy and not wanting their boats to fall into enemy hands they pulled out the bungs of their beloved yachts and scuttled them in deep water in Hong Kong harbour. After ‘Black Christmas’ civilians, including women and children, were interred in makeshift POW camps at Stanley whilst captured soldiers were put in Shamshuipo camp.  Lieut. Browne found himself in Argyll Street camp with some like-minded men, over 40 members of the yacht club including the Commodore Mr Cock.

Over three and a half years of incarceration and near starvation these yachtsmen maintained morale by recreating their weekly races virtually.

Before every race two men were designated as Wind God and Tide God, they poured over a map of HK Harbour drawn onto a piece of reclaimed canvas 6ft by 2ft. Divided into squares, it was the job of the two gods to agree on the conditions the racers would face as they steered their imaginary craft across each square of the course. RYC rules were strictly adhered to and each race was documented, these POW’s also studied yacht design under Teddy Cock and Browne edited a yachting magazine ‘Hove-To’ under the pen name ‘A. Ground’.

Reading the diaries of internees who survived one can understand that VJ day was a day of celebration and sorrow. As the Chinese population of Hong Kong were starving, European POW’s were encouraged to stay in camp until repatriated, when some did return to their former homes to search for their belongings they found that the buildings had been looted and that the floorboards had been taken up and used as firewood as had their yachts.

However, Mhari Bhàn was still waiting patiently with her teak sisters interned in the deep harbour. It took some time to rebuild Hong Kong but when the clubhouse slipway had been repaired these yachts were recovered and many had survived the course of the war intact.

After her wartime adventure, Mhari Bhàn was shipped home to Blighty and bought and sold several times before she was found abandoned in a hedge on the Isle of Anglesey in 1998. Recovered and overhauled for a second time, she sailed out of Liverpool amongst other adventures.

Scuppered, abandoned, staved, at 86 years old Mhari Bhàn is certainly a survivor. On the anniversary of VJ Day the story of this magnificent teak lady, being lovingly restored on the slipway in the village of St Monans, is a testament to resilience in these challenging Covid times. 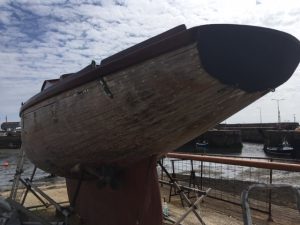