Bergen was bristling with Tall Ships as we arrived at the next stage of The Tall Ships Race in July. 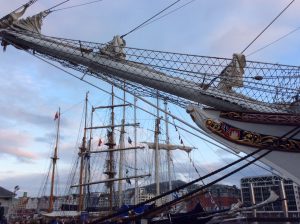 However my time in Norway was running out and I still had another half a dozen Tall Ships to tell tales on so I needed to be both tenacious and audacious! 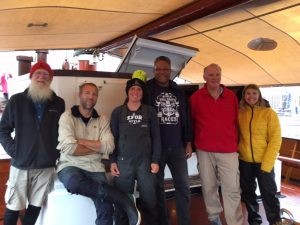 The crew of the Oosterschelde

Over two days in Bergen I visited and told stories on 5 more ships:  Christian Radich from Oslo, the beautiful old lady of the sea Oosterchelde and the wonderful Wylde Swan from the Netherlands and German sail training ship Roald Admundsen plus a special story on the Sultan of Oman’s Tall Ship RNOV Shabab Oman II on Sultan’s Day.  This ship is an absolute beauty and their orchestra of international instruments, complete with bagpipes, proudly played the Tall Ships out of port in both Fredrikstad and Bergen.

My favourite storytelling experience was on the German training ship Roald Amundsen. Sharing  stories in German, with a simultaneous translation by a young Russian interpreter, my tales of U- Boat Commanders in both world wars were perhaps my most important challenge. I wanted to tell these tales to illustrate the ‘International Law of the Sea’ and the futility of war to 60 young cadets from Germany and Russia. 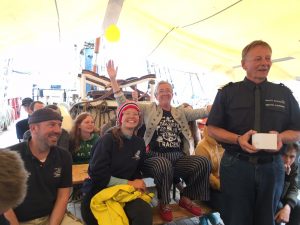 Sinking a free beer on my last night in Bergen whilst watching the fireworks I thought about the pubs down the Shore in Leith back in July 1914 and again even in August 1939 and how sailors of many nations would be drinking together and singing sea shanties together just as we were…Cheers! Prossit! Scholl! The ‘Law of the Sea’ ensures that any sailor should be saved regardless of their nationality. 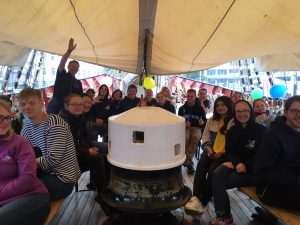 At the Crews paraded through the streets of Bergen the cadets wore fancy dress that reflected the concerns of these young people and the battle to save our oceans. Their ingenious recycled costumes and banners illustrated the war that needs to be waged against plastics. 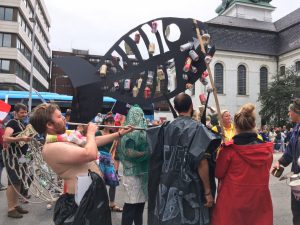 Save our oceans! Crew parade in recycled fancy dress

It is true the sea does not discriminate but unfortunately Governments do.

The Tall Ships Race brings together sailors from around the world and so meeting and sharing stories with their crew during this sweltering summer full of global environmental issues and racist rhetoric was certainly an important lesson for me. Never assume and always share stories with courage and kindness. 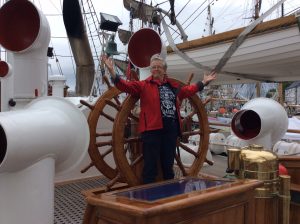