The second tall ship on my storytelling quest ‘to tell tales on ten tall ships’ was The Glenlee, a Clyde built Cape Horner! 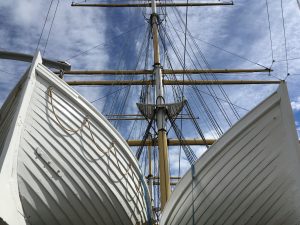 Thanks to my JustGiving fundraising campaign Telling Tales on Ten Tall Ships I was able to offer stories for free to the Friends of Glenlee on a sunny day when around 2500 folk visited the ship. Having told stories on HMS Unicorn in Dundee in April I wondered what stories awaited me in Glasgow.

Imagine working a 12-hour day, 7 days a week and still being called an idler?

Well the Mate, Carpenter, the Sail-maker and the Cook were given this label on board ship. Skilled craftsmen, Carpenters and Sail-makers often stayed with their ships for the whole of their working lives and knew their ship intimately, how she sailed under weather and under load.

Fantastic setting at the Riverside Glasgow

The Glenlee was a bald-headed ship, its’ Jubilee rig designed and built to carry no Royal (the topmost) sails, this meant the ship, with wider sails, could be crewed with less men. Launched in December 1893 her first voyage from Liverpool to Portland, Oregon took 369 days.

Apprentices were known as Brass Bounders, their apprenticeship lasted 4 years at a cost of £160 to their families. They were paid only pocket money and fed smaller portions, Burgoo a type of porridge and Dandyfunk a mess of biscuits jam and treacle. In one case some stole eggs to get more protein, they were offered the leavings from the captain’s table in return for a promise not to steal the officers’ eggs but still hungry the next day a hen went missing.

Placed on 4-hour watches they literally slept on ‘a donkey’s breakfast’ – a straw mattress that often became soaked in bad weather. Some sailors jumped ship in Australia and in South American many ports were riddled with tropical diseases including the Bubonic Plague. Captains often moored off the coast just to ‘save’ his crew as many a young sailor got drunk and fell victim to the ‘Crimps’ (local who sold them to another Captain for ‘blood money’) they could wake up with a hangover on a different ship bound for a far distant port.

‘a good shanty man was never without a good berth’

However it was the mention of the shanty men I was most intrigued by, a good shanty man was worth 6 more hands on a rope in terms of productivity. I sing many a sea shanty with the Newhaven Community Choir and the first working chants and sea shanties were published in Scotland in 1549 so it’s time for another trip up to the National Library of Scotland…I shall report back!