Queen of the Mountain?

120 years ago Frances E Willard, a thrill seeking American woman in her 50’s, learned to ride a bicycle. A Wheel Within a Wheel a book about her experience was published in 1895. She called her steed Gladys because she gladdened her heart and wrote:

In the Dales this Easter I also experienced a new sensation, learning to ride my tandem ‘Daisy May’.  Intending to make a film, for an installation at the Dales Countryside Museum in Hawes later in June, after several tentative wobbly starts my son and I mastered the beast and off we went…all down hill. After a few miles we realised that the lens cap was still on the camera… so back we went uphill, trying out both sets of gears, and started again. Later we made it up the Buttertubs pass (OK – with a wheel-less Daisy in the back of car) full of awe for Cyclista’s that manage to achieve that summit. Swaledale was beautiful in the spring sunshine and whilst Swaledale Woollens served as a distraction I was reminded of Frances’s tip to lady cyclists: “Tend to your knitting…” (i.e. don’t get distracted) so after a pub lunch it was a good ride down from Muker to Gunnerside.

Then wheel-wibble set in and alas we found we were a ball bearing or two short of perfection… Daisy May is high maintenance. 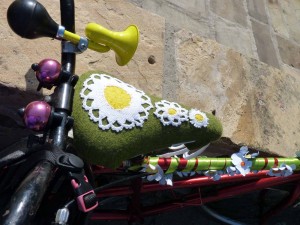